My first batch of homebrewed beer 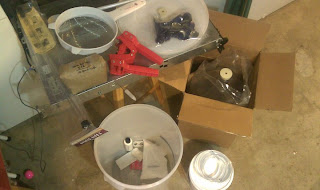 Several months ago, I started expressing interest to my wife about brewing beer at home. I mentioned this in full ignorance, unaware of the process or joys that can be had with this hobby. The only experience I had was drinking beer and one quick tour last year at the Rogue Brewery.  Originally I thought, “Oh, I’ll just pick up one of those Mr. Beer things I see everywhere and go from there.” My wife knew better. She invested a bunch of time in research and came up with a local place to get set up.

On father’s day, the family surprised me with a gift that I had to hunt for. In the morning I was given a set of directions and they had me head out to find my treasure. Upon parking, they blindfolded me and led me to Main Street Homebrew Supply. This place was amazing, and the guys there got me all setup with whatever I didn’t have already at home, which was almost everything. Besides the equipment and the 400 page book about homebrewing, they gave me a one page quick sheet on how to get my batch running. The supplies were ready, but was I? 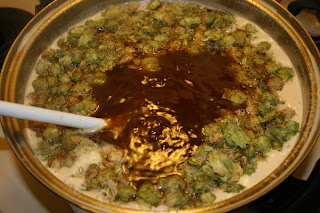 A couple weeks later, after much reading and preparations, I started in on making my first batch, with the assistance of my wife (mostly for moral support). The process was much easier than I had anticipated, with every step detailed on the sheet I got from Main St. Brew. Before I knew it I had a nice wort (pronounced wert) fermenting in my 8 gallon bucket.

After about a week, the beer was racked into a second fermenter, called a carboy. This allows the beer to sit longer to cure without having to worry about the taint that can be created by all the spent yeast at the bottom of the brew. At this time I “dry hopped” the brew. This is a process in which you take a small amount of hops in a cheesecloth sack and put it into the mostly fermented beer during racking. Then I left it alone in a cool, dark corner for another two weeks.  My favorite saying during this process, “You!  Go in the corner and make me beer!”

In these two weeks, I made sure the stage was set for bottling. Due to a bit of luck, I had a great many Trader Joe’s beer bottles in my house that I hadn’t gotten around to taking back. These were soaked in a 5 gallon bucket in several batches for a night each in water and Oxy Clean to get all the labels off. 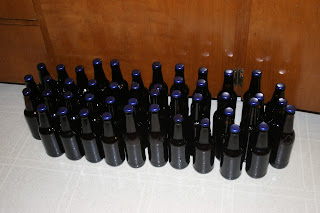 Finally the day had arrived. It was time for bottling. Boosted by my success so far in not ruining the batch I casually set to work getting everything sterilized and the stage set for the operation. With my wife’s help, we racked one last time to stir the carbonation sugar in and start into the bottling process. Bottling went smoothly, and before we knew it, 47 bottles of delicious looking brew sat on our kitchen floor. Then it was back to waiting again, another TWO weeks for the carbonation to be naturally created from the magical yeast still left in the bottle. I did have a small sip at the bottling phase, and though the beer was flat at that time, it tasted delicious. It did have an amazing hops kick however, which I was worried about, but I figured it just needed time to mellow out in the bottle, or so I hoped.

At the one week mark I couldn’t stand it, and opened a bottle. The beer was only slightly carbonated, and still fairly hoppy. Ok, stop being impatient, wait another week.

Two weeks after bottling I put two bottles in the fridge when I got home, and a pint glass in the freezer. This had to be a romance, a courting of the brew. When dinner was made, I poured my crafted beer into the pint glass. Immediately I was surprised by the massive head that reared out of the glass at me. Slowing down I got the rest of the bottle into the glass and sat there marveling at it. I had done it, with the help of my lovely wife. An actual beer made at home. Amazing. 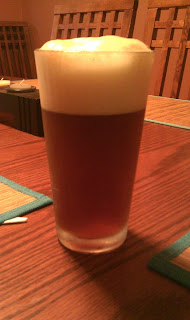 I lifted the glass and savored the cool refreshing beer. The brew sneaks up on you. It comes in mild and smokey and then playfully slaps your cheeks with hops, and a gloved hand. The brew was still quite hoppy, like a mating rabbit in spring, however it had mellowed out enough in the bottle to not be obnoxious. There is an odd aftertaste that I haven’t figured out yet. Almost like sucking on an old Coleman cooler. I’m hoping that the people at Main St. can help me figure it out, as I’ve tasted it before in another homebrew I’ve tried.

Overall, it was a great success. I didn’t have to throw out the batch, and it tastes pretty decent, though my wife still refuses to really drink it. Between the dark amber chest hair taste combined with the drunken bunny hoppyness, it is a bit too strong for her liking. This isn’t a big deal however, because it gives me a chance to try out making a light IPA or Blonde in the very near future.

This entry was posted in Food, Homebrewing and tagged beer, brewing, homebrewing, hops. Bookmark the permalink.